So, a little about me here, huh? Haha, well, before I even say anything, I want to thank you all for stopping by and showing interest in this story. Even though I wrote it years ago, I still get messages from readers saying that they enjoyed it (and you better believe I read every one!). It means so much to me and from the bottom of my heart, thank you. Thank you for reading and stopping by.

I'm a young adult living in the US and graduated with a BA, majoring in Film, with a Post-Production and Japanese Studies Minor. After college, I spent a little over two years living overseas in the greater Tokyo Metropolitan area due to my passion for Japanese Language and Culture, after which I returned to work back in the United States.

I began writing fan fiction back in April of 2006 under the name "RenaRedhead" (pronounced Ren-a). My 3rd multi-chapter story and 14th story all together, "Custody", which I wrote during my high school years, was inspired by my love for the original "Teen Titans" show of 2003-2006 as well as the 1980's comics penned by Marv Wolfman and George Perez.

Since writing "Custody", while I still dabbled here and there with writing, I became a cosplayer in 2009 under the name "SkywingKnights", upon discovering the art of the craft of cosplay, and have been a cosplayer ever since.

In my spare time when I'm not doing either cosplay or writing (or working), I enjoy sewing, watching foreign dramas, traveling, watching anime, reading, doing photography, and studying Japanese. (みんなさん、よろしく,ね？) ^_^

I am also an active member of the Church of Jesus Christ of Latter Day Saints.

As RenaRedhead, I have published on FanFiction.Net 31 stories.

As SkywingKnights, I have done 77 cosplays.

To see more of my work, you can check out the following sites:

Finally, to answer everyone's big question, yes, I'm a true natural redhead, no I've never dyed it, and yes, for now you're only getting a picture of me in a wig (it's my favorite lol). Maybe one day I'll let everyone see my red hair, but for now, all you get is pink. 😉 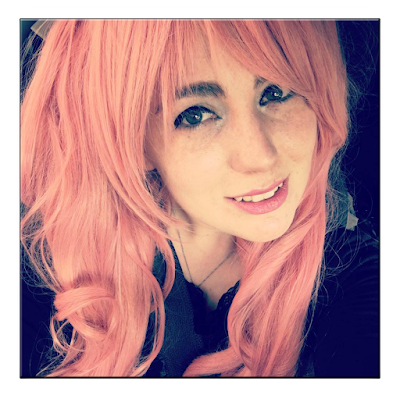