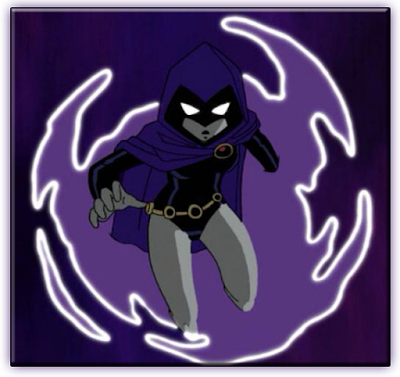 Daughter of the inter dimensional demon Trigon and human mother Arella, Raven is the Titans' resident Mistress of Magic. In a near constant state of meditation in an attempt to control her emotions which could wreak havoc if left alone, Raven is much calmer, quieter, and level headed than most of the Titans. Despite her lineage, Raven had always hoped that she would be able to defy prophecies that stated that she would act as the portal to Earth for her father, who's sole goal was to reign over the world with death and destruction. When the time came, with the help of the Titans, Raven was able to stop her father's plans. Since that time, Raven has become much more confident with her abilities as well as her place amongst the Titans. However, she must still continue to oversee her emotions so that nothing calamitous befalls her and others due to her powers of dark origin.

Raven remains fairly true to her cartoon counterpart. I felt that the cartoon was great in that Raven was able to be more of an action oriented character and not limited to being an empath or esper. It allowed for more of her involvement in the plot of stories as well as more of a conflict within herself. She supports peace, but fights to protect the innocent, a very contradictory kind of path (a bit like Dove out of DC's Hawk and Dove). Additionally, this meant that she would have a harder time controlling her powers as she would need to use them just enough to use her telekinetic abilities, while still reigning them in. Furthermore, she is clearly the most powerful of all of the Titans, making her the stability of her powers highly important.

As far as personal characteristics, again, she remains more true to her cartoon persona. She's an intellect, sarcastic at times, and prefers seclusion, but is fiercely loyal and grateful for her friends' companionship. Additionally, she has a strong sense of perception and can sense many things others can't or don't right away due to her empathic abilities, as well as her own insightfulness. One difference from her cartoon self that she gains from the comics is her alias as Rachel Roth, which she uses when the Titans have a need to go undercover.

Due to the nature of her powers, Raven focuses a high amount of her time on controlling her emotions. This leads her to be a bit reclusive and more of an introvert than the rest of the Titans. However, simply because she has to control her emotions, does not mean that she is void of them. Rather she works to control them through means of meditation, reading, and overall calming activities. Being well read, Raven is also extremely intelligent and regularly offers solid advice and insights into criminal cases and behaviors.

Though Raven tends to stick to herself, she does have good friendships with each of the Titans. She puts up with the boys' rambunctiousness and entertains Starfire's more girly whims, seemingly begrudgingly at times, but the change of pace is secretly a welcome one. After an instance in which she created a mind-bond with Robin to help him during an attack on his mind by Slade, she can now more easily create a source of communication between the two of them telepathically. She is fiercely loyal to her friends and ultimately, her biggest wish is to never be a source of harm to them, which motivates her to gain a stronger control over her emotions and powers.

I always got the impression that although I liked Raven as a character, I didn't like her as much as most people did, haha. She had quiet the fanbase! And I don't blame anyone for liking her character at all. Honestly, I almost felt a little left out because she wasn't my favorite. ^^; Even though Robin was my favorite, I had a lot of respect for Raven as a character and greatly appreciated the fact that the writers tackled bigger, more serious issues with Raven, particularly ones that were more relatable to kids and teenagers. All of the Titans were relatable and had issues that we as an audience could understand, but Raven often touched on some that were... closer to home and more threatening.

Episodes like "Spellbound" with the comparative aspects to online predators as well as the fear of being cast out because one doesn't fit in, or of course her entire arc line in Season 4, where she comes to the realization that her birth parents don't have to define who she is or who her family is, I think were really powerful messages that even today, we don't see enough of in shows targeted at kids and teenagers.

That said, I really loved how they updated and brought a character into the 21st century. She went from being purely a mystic, who could be seen as either overly dramatic or unfair at first glance (you really had to read a lot of Titans comics to get to know her I felt; after all, she tried to stay away from the Titans, of course readers are going to feel that exclusion at times too), to someone who was filled with many emotions all fighting to be heard. In that regard, I think everyone could relate to her on some level and could root for her to continue to be strong in the face of overwhelming obstacles. Because really, I think we'd all hope that we could have that same strength if needed and her ability to overcome those challenges, helps us believe that we could do the same.